With a strand of yarn curator Airom Bleicher connects Waronker’s central instillation to the responding artworks found on the gallery’s wall.  Connecting these pieces together further emphasizes the communication occurring between artists. Inspiration and criticism is addressed to the viewer through a visual language rather than written words. As artists contributions began to number, the exhibition evolves causing a shift in dialect.

Although Waronker’s Magic Forest may have become a diluted and lost influence, the continuity and integrity of her core instillation is found across the gallery’s wall. The exhibition was formatted to resemble the trees in Magic Forest. Every piece is shown linked together to creating a tree with branches stretching across both ends of the gallery. 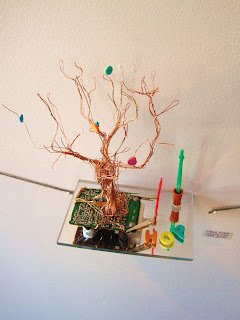 Due to the influences of each artist’s predecessor, the creation of art was unable to develop organically. Beginning with a forest and ending with an artificial exhibition, Anachronious Mind Tree caused a community of Los Angeles artists to coalition together in creating a visual model of artificial intelligence.
Posted by Karie Nouveau at 11:40 AM